10 reasons why I hate the Miami Heat 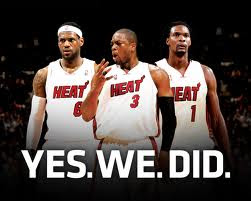 The carnival-barker PA announcer. Chalmers hits a 12-foot jumper in the first quarter and you’d thought Jordan just hit the buzzer-beater over Ehlo. “MAAAAAAARio CHALLLLLLLL-MERRRRRRS! ASSIST FROM DUWAYYYYYYYYNE WAAAAAADE!!” Goes on for 11 seconds after every score.

The preseason celebration/coronation where they predicted 7 titles – BEFORE THEY’D EVEN PLAYED A GAME.

Mike Miller’s hair. Yo, Vince Van Patten called, he wants his ‘do back.

Udonis Haslem letting his nasty saliva-dripping black mouthpiece hang sideways out of his piehole after EVERY SHOT HE MAKES. Disgusting.

Did I mention that preseason celebration/coronation?

Yes, I know this post isn't about advertising. Sue me. My hatred of the Heat is all-consuming.
at 5:22 PM

Is this about the Heat or Obama? Is there any passion about things that actually matter?

Sarah, the Heat matter a great deal. Not as much as Obama maybe, but make no mistake: they matter.

Bastards, all. Hope the Heat go down in flames.

The coronation could have been premature. Arrogance is ultimately its own worst enemy.

Detroit is the new chic destination spot for the jet set. An ad man told me so.

Why did Obama give guns on purpose to drug gangs? Why did he want drug gangs to use the guns to kill innocent people?

Could this be more important than the Miami Heat? A government program designed to give automatic weapons to dangerous thugs, so they would kill people. You would think someone who gets upset by a basketball team might have some concern for Brian Terry, who was killed by this Obama program. What is wrong with your piehole? Nothing coming out.

What's up every one, here every one is sharing these familiarity, thus it's
good to read this webpage, and I used to go to see this weblog
everyday.