Deconstructing some random McDonald’s ad against my will 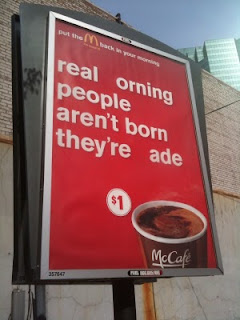 When I look at ads, I have this voice in my head I can’t turn off. I fill in the backstory – the fights, the compromises, the small victories. Of course, I have no idea if all this happened or not. But I imagine it to be.

I saw this ad yesterday from my old shop, Leo Burnett. I like this campaign. Yes, the missing-letter thing has been done before, but it’s simple, clear, fairly charming – and it’s a campaign, not awards-bait one-offs like McDonald’s is known for doing in outdoor.

But back to the voices in my head. Here’s what I think took place in the development of it.

The small $1 balloon was a battle. The client wanted it bigger and horsier; the agency wanted it smaller and more tasteful. Score one for the agency.

The writer originally wrote the headline without the word ‘real’ in front of it, but somebody made them put that in. Who knows why.

The proofreader suggested a comma after 'born' but the writer said no.

I might be totally off-base. If anyone out there knows what went down, please post here.
at 7:14 PM

I suspect that "real" was added by a smart art director, who realized that the void would be unclear if not surrounded on both sides by words.

No Art Director Hall of Fame? Where will parents take the kiddies this summer? One year, we went to the Halls of Medicine, which were not as good as you'd think. Lots of coughing, phlegm everywhere.

You don't get to use "phlegm" in a sentence very often.

You know Pat, you're right. You don't get to use the word 'phlegm' in a sentence very often. But that's why 100 Ad Words exists: to make dreams come true.