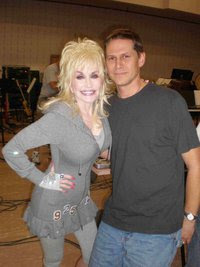 What does Western Swing music have to do with marketing? Absolutely nothing, but maybe it should. Today, the second installment of the 100 Words Artists in Residence Series talks to Western Swing legend John England (above, the one on the right), leader of John England and the Western Swingers, former sideman of Loretta Lynn, friend of Dolly, the handsomest man in music, and the one who has always made the ladies swoon.

1W: Why hasn’t Western Swing been used in more ads?

JE: Our albums just haven't crossed enough desks at the ad agencies. I do see country songs like "Your Cheatin Heart" and "Another Day, Another Dollar" getting some action, so I'll keep my hopes up for Western Swing, too.

1W: What’s the weirdest thing that’s ever happened to you on stage?

JE: Well, there was one gig where transvestites danced on the bar with no undies. That weird enough fer ya?

JE: I'm supposed to say "Faded Love", but I'm not really monogamous, song-wise. Right now, I'm flirting with a cute little tune called "I Laugh When I Think How I Cried Over You". My long time steady is "Time Changes Everything", and my backdoor woman is "Milkcow Blues".

1W: How would you describe the current state of country music?

JE: There's more variety than most folks realize. Taylor Swift, Dave Cox, and Bobby Flores are some of my favorites, but I'll bet you ain't heard of 2 of 'em. I think there are about as many good songs as there ever were, but we usually think otherwise because bad songs are forgettable.

1W: 100 Words has a sizable following of Tea-Partiers. Anything you’d like to say to them?

JE: Yes --- you guys are right about everything! If you say anything else, it really pisses them off. Seriously, most TPs (and most liberals, too) love our country, and want to see it do well. The thing I hate to see is that we're not working TOGETHER to move our country forward. It's time for EVERYBODY to cut out the name-calling. The guy on the other side of the fence ain't wrong about EVERYTHING, and you're not right about EVERYTHING, either.

1W: Well said. What are you wearing right now?

Interesting post. I suggest you listen to Merle Haggard - try Living With The Shades Pulled Down and Live and Love Always and My Life's Been A Pleasure (Merle, Ray Price and Willie Nelson). Merle is getting a Lifetime Achievement award at the Kennedy Center this year. He kept the western swing and the Bakersfield sound alive over the past couple of decades. Excellent stuff. Good to take your mind off of politics.

This is an excellent post but we need to learn more about this photo op with Dolly Parton.

I will look those up. Thank you.

John is telling all about the Dolly photo op when his book comes out next spring.

You can't explore western swing without studying the masters of all time: Bob Wills & The Texas Playboys.

The body of work stands tall against the ravages of time. In fact, when I first heard it in the mid-80's, I thought it was some new wave band.

Check 'em out and give yourself a hug for being so smart.