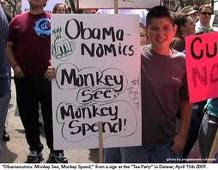 The Tea Party is angry. Angry angry angry! Angry at government (“keep your government hands off my Medicare!” they say, without an ounce of self-awareness.) Angry at spending. Angry that angry white men don’t rule the world anymore (okay, they don’t come out and say that exactly, but it’s as much a part of the Tea Party and its anger as country music and powdered wigs.)

But here’s what I wonder: where was that anger eight years ago, when George Bush was driving this country into a ditch behind the wheel of a big honking vehicle called the Iraq War, to the tune of $800 billion? Now that’s some government spending the Tea Party could have gotten good and worked up about! But like tiny time pills past their sell-by date, that anger took eight years to kick in.

How stupid are you? Obama quadrupled the deficit you and he claim was irresponsibly high. He intentionally destroyed 100,000 jobs in the oil industry, unilaterally demanded the destruction of hundreds of independent car dealers which were not owned by GM or Chrysler ending hundreds of thousand of jobs. He has targeted the coal and manufacturing sectors, causing massive jobs losses there as companies shutdown or move overseas. He has nationalized/destroyed the banking industry and forced then firing of their CEOs. He ended the private student loan industry. He has essentially nationalized the health care industry, setting it up for reductions inequality, increases in cost, and causing tens of thousands of doctors to leave the profession because they do not intend to be his pawns. His policies have destroyed them mortgage industry which suits his goal of affordable housing for all - now you get a house with no requirement to pay the mortgage. Of course this means the government will be the source of all mortgages in the future. In sum, your hero seeks to destroy the private sector because he doesn't like it. This is not a mystery. He was raised by Marxists and he spells it outnin his book. He doesn't like America as it was founded and he dislikes the limits the Constitution places on the government. In other words, he thinks he is smarter than Madison, Jefferson, Franklin, Hamilton, Washington and the others. And you agree. Now that is some arrogance for a guy - Obama- with no serious accomplishments of any note prior to being elected. His most noteworthy attributemis his antipathy to the country he purports to lead.

I understand that he is a demented narcissist. But what is your excuse for supporting this guy who is destroying the country your kids will live in. He is destroying he economic engine that would produce their jobs and their potential prosperity. But you are helping to destroy their future. Have you not seen the stories from France and Greece and the UK? Are you so committed to the lame BS someone sold you in college, and your need to hold fashionable views, that you have completely abandoned critical thinking? And you areOK with watching this fool raise taxes, increase regulations, steal freedoms, and corrupt the entire system - and that will be yourmlegacy. That is what he is doing. It is his goal. It shouldn't be yours unless you are one pathetic father.

By the way - I assume from your comment that you supported Clarence Thomas for the Supreme Court and Alan Keyes for Senator in Illinois. My guess is you supported neither - because they are both black.

Liberals like you are the racists. You sit idly by and let generations of black kids rot in inner city schools rather than entertain the possible solutions that could offer them a chance - like school vouchers. No - your lockstep Democrat brain says fuck the inner city kids. The NEA is our ally, then union. And they don't want choice cause itmmight make them work a little. So screw the kids. The NEA campaign contributions - that is the issue. Every major city is run by a Liberal Democrat like you. And they are all actively destroying kids lives though their schools. Of course my guess is that you live in some fancy North Shore suburb so the city schools are not your problem. You don't care about them - those are just black kids. Probably not many of those in your neighborhood.

Well Gary, after the prior two comments I think you can rest your case. ;) Angry. Scary angry. And astonishingly self-righteous. Please go to therapy, Clark and Thomas. If not yourselves, for society at large. Thanks!

Angry? Just because the current President and Democrat Party are governing against the will of the people. With elections now taking place with most Democrats not running on the agenda they just finished implementing. Most Democrats acting as if they too don't like Obama and Pelosi. Angry - that an unaccomplished nobody himself is the "angry guy" who hates America and goes around the world apologizing for it? Angry that this President proudly goes around disparaging all business asnbeing motivated byngreed, when he is wealthy himself, and achieved wealth not through productive work but through corruption and political connections.

Yes - a lot of people are angry. The angry people don't like tyranny. The other people, are the useful idiots of this President.

Why would anyone be angry. Nhe's doing all this great stuff and nobody has to pay for it. We don't have any money and the states and cities are all broke. This great stuff will get paid for by our kids. And it is right that Garynshould be supported by his kids. Spend now, py a few generations from now. Cool. Means I can get that MacBook Air and keep my second house.

Angry? Just because the current ruling party uses election fraud, cheating for those of you in Chicago, as it's main tactic. It is done in the open, with vast machinery and armies of SEIU thugs. And those like the writer of this blog are fine with cheating, if it helps win. Why have an honest election and be forced to campaign on actual ideas and policies, when you can use Chicago thug politics. And the left, like this writer, will never have an issue with it. And the current Justice Department does not prosecute voter fraud. It actually funds it. So, why would there be anger. The Chicago way says, hey bab, if you are being raped, just lay back and enjoy it. The cool liberals in the crowd will have a beer and watch.

What's interesting, you tea-baggers (I'm assuming you're tea-baggers), is you haven't even addressed the main point of my post, which is what about the runaway spending in the Bush years? Didn't hear a peep about that.

Tea partiers exclude defense spending because America was founded on, and continues to embrace, aggression at any cost. Reasonable objections to war have always been called unpatriotic and unsupportive of our sons and daughters in the field. It's illogical, but I'm afraid we're dealing with behavior that's primal to many Americans. This is why intelligent, objective thinkers are shouted down by brainstem-driven reactionaries. Truth is, the tea party is driven more by testosterone and xenophobia than justice and fiscal responsibility.

Here's a peep about the deficit. Democrats and some Republicans criticized the size of the Bush deficit. Obama was elected with complete Democrat control of congress. The deficit is now four times what it was. No liberal ever proposes any reduction to spending except to the military, which is the major constitutional job of the government. Democrats answer to deficits is to increase them. They have spent trillions. So, if YOU are so concerned you will join the Tea Party. Limited government, reduced spending and the generational theft, and restoring respect to the Consitution are their main goals. And the Tea Party people did not like Bush, something you would know if you had a clue.

Now today, many more stories of Democrats committing blatant voter fraud. Rigged machines maintained by SEIU thugs automatically voting for cheating Democrats. Not a peep out of you about how your party riles on cheating to win, and doesn't even hide it. And of course no principled Democrats stand up and come out against cheating. What great leaders. What a pathetic party!

I thought the blog was good. But the comments section is now my favorite part of 100 Words. I feel like I need a rabies shot.

"Oh, that’s right. Back then, the president wasn’t black."

So, a review of Democrat treatment of diverse candidates. This is for the race, ethnic and gender obsessed.

There are scores more women and black candidates in the Republican Party. The SEIU, NEA and Gary Doyle supports none of these. He doesn't like them because he dislike blacks and women. He is a racist and femo-phobe.

Actually, the reason he doesn't like them is his stone-age belief is that any black that does not vote Democrat is not "authentic", like Clarence Thomas. That is because the Democrat Party, which supported slavery, now runs an "intellectual plantation" where blacks and women are only allowed to have certain thoughts. The Democrats do not permit blacks to think independently. Notice the calibre of the black leaders in the Democrat Party. Al Sharpton, Jesse Jackson, Louis Farrahkan. Nothing more need be said. Taking your racist accusations elsewhere you tool.

Bll Clinton - "I spent all day today trying to talk Kendrick, (the BLACK - Democrat) out of running for the Senate. I want all Democrats to vote for the white guy (Republican till four months ago) - Charlie Crist. Today, white is better than black, even though Meek has been a good soldier. We can't let the Hispanic win, so don't vote for the Black Guy"

Here is a brief video of an actual doctor explaining what the language of the bill will require of him on Jan. 1, 2013. If you want to understand voter anger, consider that most voters, in a given year, visit a doctor. Some ask the doctor how this "reform" will effect their practice, and the patient experience. This video is simple, direct, accurate. Worth considering, if you have any interest in the future of the real health care system. As opposed to just putting out cheap marketing talk. Blogomercials. If you have a brain, and you care about the future, and an attention span longer than a car ad.

If we can produce enough manufactured votes in Chicao, Philly, Clevleland, Dade County, Detroit - places where we run the show and we can control the outcome, we can still win this thing. Good thing is we can turn up the vote manufacturing effort and even if we are caught, it doesn't matter. Our base wants us to do whatever it takes to win including cheating. Our base will never abandon us. There. Is nothing we can do, no crime that we can commit, that will cause our loyal adherents to leave us. The union thugs, the NEA, the highly paid state and federal workers, those on welfare, the professors, the dead, the cool professionals who need our stamp of approval for their political ideas. We own these people. Period. The only thing we could do to lose their respect is show respect for the Constitution, admit that big government has never accomplished anything well, be willing to consider choice in schools as an option, actually cut government spending.

Nah. We will cheat, steal elections wherever possible, and force our ideas on the people. That is just who we are.

Words of wisdom. Warning - don't read unless you have intellectual and moral capacities. This black man may be too powerful for your processor.

Obama trip to India to cost taxpayers $200 million per day.