I was right about the iPad 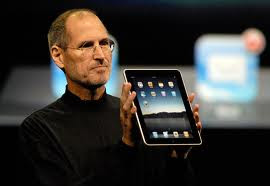 The 12 readers of 100 Words will remember I got a lot of grief six months ago from some people (one of whose initials are CLARK) regarding my bold prediction that the iPad would be a success, but not an iPhone-level success.

Well, it turns out I was bang-on. Apple just released its quarterly results, during which they sold 14.2 million iPhones. iPad sales in the same period? 4.1 million, which fell 600,000 units short of analysts’ expectations.

Does that make the iPad a failure? Does that mean it won’t be a force in publishing and movies and a deservedly prominent part of any marketing mix? Does that mean I’m not getting one (when the Gen-2 version with the camera comes out)? Hells no! It just means it’s not a ubiquitous, iPhone-level game changer. Just like I predicted.

I partly agree, Gary. In the business world iPads are absolutely game changers. They are EVERYWHERE! Obviously, they don't have the universal appeal of a smartphone. The iPad is a more purpose-built device, IMHO. But watch how many competing tablets are released in the next 12 months. I say the game has changed.

You were right. My brother is developing an app for the iPad (along with millions of other people). The extra screen real estate is exciting with expanded opportunities for a portable device. But the limited number of owners limits revenue and who is your audience right now? But I find it interesting that me and my other 40-something mom friends who don't quickly adopt new technology all want one. I'll get an iPad before I get an iPhone. (we gals still hate the name.)

New 11" MacBook Air came out today. I have more interest in one of those at this point.

Interesting perspective, my friend. I think that the game changing is yet to be realized. The success of the iPad shows the potential of creating a new platform for communication and publishing. Early iPad results are less meaningful than how many "tablets" ultimately enter the market and what they replace...printed magazines, directories, collateral along with, possibly, netbooks (last years rage) and even the notebook computer. The market will be flooded with Android, RIM and Windows mobile tablets by year's end. Then we might see a game-changing movement.

Bang on, indeed. And an iPad is definitely in my future.

Bang on, indeed. And an iPad is definitely in my future.

I don't know who this CLARK guy is, but that HUNK was right. The IPAD is huge. I have one. I see them everywhere. In hospitals, on the desks of the anchors on TV, in stores. The 4.6 million sold was this quarter. Pretty good for only the 2nd quarter of its life. I believe that figure is higher than the iPhone for its months 4-6. The IPAD had already killed the "netbook". That category is essentially gone. Now, the iPad is working its way into the "enterprise". That is where it will wreak havoc. And the home of course. You weren't right. But you weren't totally wrong. Both the iPhone and iPad are huge game changers. As Steve Jobs said, "we have a tiger by the tail." He was talking iPad.

You make a good point. The Android, RIM etc. clones will up the ante. But I don't think they'll elevate the tablet into laptop-replacement territory.

Steve Jobs did say he had a tiger by the tail. He also replied in my original post that I was dead wrong. You can look it up. I hate to prove Steve Jobs himself wrong. But I did.

The point of your original post was that the iPad was not going to achieve much success because:

1. People already have an iPhone
2. It has no keyboard and people won't accept it as a computer
3. People won't want to carry one around when they have these other things already.

In 6 months Apple has sold over 7 million of these, over 4 m in the last quarter. The ASP is in the range of $750, way beyond the ASP of the iPhone or iPod. People are in fact buying them as computers in droves. And they are carrying them around. And the big marketplace out there is not saying "I will wait for the more expensive new MacBook Air" - they are buying iPads because they are easynto use, have lots of apps, are extremely mobile and the right price. The Air is nice too, and will probably also sell well.

The real point of your post was that you had seen the iPad and found it lacking so it would succeed only in a small way. That is now seen as completely wrong. It has succeeded in a huge way with more to come. The iPad is a big success, even bigger than the guy who just came out to CA to meet with me.

I don't know if you're right or wrong but I will do as you say and call you 'Nostra-Doyle' (has a nice ring to it).

" FCC: Spectrum auction could be worth $120 billion due to ‘iPad boom"