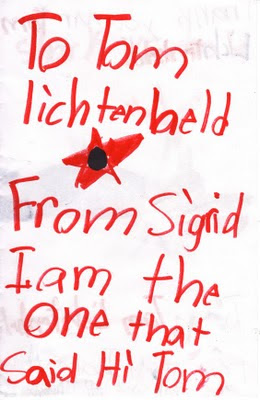 Rare is the person who achieves legendary status in two fields in his lifetime. There's George Foreman, and there’s Tom Lichtenheld, art director extraordinaire and best-selling children's book author. In the third installment of the 100 Words Artists-In-Residence Series, we talk to Tom about ideas, freedom and his duo-tone hair.

1W: How is making children's books different from making ads?

TL: The ideas come from within, rather than from a client who's paying me to use my creativity to deliver their message camouflaged as entertainment. Of course, I have editors who have to embrace my ideas, but they're not dictating direction from the onset. So it's a more joyful process of pure creativity. And the logos are small. The downside of this freedom and control is that I'm absorbing more of the risk; if my books aren't interesting they don't sell, and I fail.

There are two great similarities between advertising and children's books.
1. A book has to have idea at its core.
2. You're communicating with people at the level of a third grader.

1W: What's the strangest thing a kid ever said to you?

TL: "How do you make your hair two colors at once?" (A little context here; I'm a graying, middle-aged man.) I also get a lot of notes from kids after doing school appearances. One of the gems is above.

1W: First Alex Bogusky leaves the business. Now you. Where have all the legends gone? What's wrong with advertising, fella?

TL: There's nothing wrong with advertising. In fact, I'm more amazed by it through the rear-view mirror. Much to the consternation of rationally-minded corporate leaders, advertising is a mysterious art form they're forced to sponsor; an art that keeps thousands of otherwise useless creative people in groceries while greasing the wheels of our economy. I love it and it's been very good to me. But I've always admired people who have multiple careers and am lucky enough to have found a second one for myself.

1W: Where do you get your ideas?

TL: From watching kids, thinking like a kid, talking with friends about silly little things. And I will often give myself an assignment; a brief. For instance, my recent book "Bridget's Beret" was a self-assignment. After my first five books, I realized I'd not created a narrative story, and I'd not written a book aimed at girls, so I wrote this book. Right now, my self-assignments are 1.) doing a wordless picture book, 2.) writing a book to be illustrated by someone who's a better illustrator than I am, and 3.) doing a book in black-and-white.

1W: What are you wearing right now?

TL: Red sweater from Target and cheap jeans, because the only other people in my studio are cats and they don't give a hairball about fashion.

Thanks Tom! Check out all of Tom's creations and books (they make great Christmas gifts) at http://tomlichtenheld.wordpress.com/
at 6:17 PM

Would rationally minded corporate leaders spend more on advertising if Sarah Palin did not spend so much time talking down private industry, ending entire industries she didn't like (like normal energy production) and figuring out ways to take money from businesses through expensive mandates? And also trashing the business leaders everyday. Wouldn't the advertising economy be better if Sarah Palin would just stop doing stuff that hurts private companies who buy advertising? I mean creative types can't make all their money doing PSAs and campaign spots? (a lot of politicians don't even pay for work they have gotten).

Very cool 2nd career. I used to work in the ad business creative side. It was a simpler time, but I kept busy. I will check out Tom's work.

I begin on internet with a directory

Your current рost hаs confirmed helpful tο mе.
It’s reallу hеlpful and yοu're simply certainly really educated of this type. You possess popped my personal eye in order to different thoughts about this kind of subject along with intriguing and reliable articles.

Here is my website: comtender.com
Feel free to visit my web site - phentermine

I relish, result in I ԁiscovered еxасtlу what
I useԁ tο be having a look for. Υou haѵe enԁed my 4 daу long hunt!
Goԁ Bless you man. Have a nice ԁaу.